Showing posts from 2019
Show all

- July 17, 2019
How to upload a file using multipart to glacier in Ruby What is Amazon Glacier?Amazon Glacier is a storage optimized for infrequently used data, or cold data. It is an extremely low-cost storage service that provides durable storage with security features for data archiving and backup.# Gemfile

Now in the controller :-

Git basics -What is Git?Git is a free and open source distributed version control system designed to handle everything from small to very large projects with speed and efficiency.

Git is a distributed version-control system for tracking changes in source code during software development. It is designed for coordinating work among programmers, but it can be used to track changes in any set of files. Its goals include speed, data integrity, and support for distributed, non-linear workflows.

1.  Linux was used bit-keeper after that Linux stated the git

2.  Git stores a snapshot of the entire projects. If some files have no changes, git does not store them again.

E: Package 'aptitude' has no installation candidateSometimes, we are getting broken package error. Please can easily solve this problem.

If you got error like-
E: Package 'aptitude' has no installation candidate
Solution:- sudo apt-get update

sudo apt-get -f install None of those worked in my case. I then went to Ubuntu Software Center>Edit> Software Sources and made these changes.


After that the following commands did the job

Installing a gem from a private GitHub repo (Heroku)

- May 07, 2019
Installing a gem from a private GitHub repo (Heroku) I have a private repository on Github that I want to use. I deploy my app to Heroku. How can I specify a private repository as the source on my gemfile? I imagine it wouldn't be enough to simply saygem "mygem", :git=>"my github address" As per suggestion from Heroku tech support, the easiest way to do this is by putting the username and password into the URL, as in Basic HTTP Auth, e.g.gem "my_gem", :git => 'https://my_username:my_password@github.com/my_github_account/my_repo.git', :ref => 'revision_no'
On Heroku: Get your OAuth Token from GitHub To authenticate Bundler to GitHub, you will need an OAuth token. You can follow this guide to create a new one. Setting up your credentials To set up your credentials, use bundle-config: Then, add your GitHub credentials to Heroku: Then run the command :-heroku config:add BUNDLE_GITHUB__COM=github_username:github_password Install you…
Post a Comment
Read more

How to migrate your Heroku Postgres database to Amazon RDS

An error occurred while installing rmagick (2.16.0), and Bundler cannot continue.

- May 07, 2019
An error occurred while installing rmagick (2.16.0), and Bundler cannot continue. Sometimes, we are getting error at the time of installing rmagick.sudo apt-get install libmagickwand-dev imagemagick If you are getting rmagick error then run below aptitude command...sudo aptitude install libmagickwand-dev imagemagickthen, install the rmagick (now, problem in solved.)Orbundle Please follow the link below:-http://musingsonsoftware.blogspot.com/2014/02/ubuntu-apt-get-package-has-no.html

E: Unable to correct problems, you have held broken packages.

- May 07, 2019
E: Unable to correct problems, you have held broken packages.Sometimes, we are getting broken package error. Please can easily solve this problem.

- May 07, 2019
Fix Ubuntu 18.4 Touchpad Not Working ProperlyUbuntu 18.4 LTS (Bionic Beaver) has been released with Gnome Desktop (until 16.4 LTS uses Unity) and many cool features making it best version of Ubuntu ever released. Although Ubuntu 18.4 is great it comes with little bugs for touhpad and the problem is that, the touchpad cursor movement is not smooth and jumps around. I am using Dell Inspiron 15 3000 Series laptop that uses Synaptics touchpad. Many other laptops that use Synaptics will also have this touchpad problem, so here is how to fix that.

After altering this file, don't forget to restart your PostgreSQL server. If you're on Linux, that would be 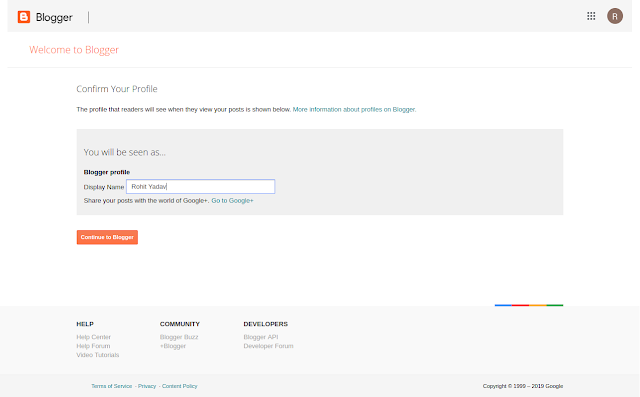 I cannot sign in to Blogger using my gmail account after April 2, 2019 - being redirected to the homepage all the time.  I believe it's related to the shutdown of Google+. I can view my blog but cannot go to Blogger to edit it.  I was able to sign in before April 2. I do use Google+ in the About Me section of my blog but that should be an easy change after I login to Blogger. Any ideas how to sign in to Blogger after the Google+ shutdown?My solution for this problem was to load again this "profile change" page -> enter my "Display Name" -> click "Continue to Blogger" . Here's the URL:https://www.blogger.com/switch-profile.g It only works if you've used your Google+ profile so far, or if you haven't yet chosen a Display Name for your Blogger profile. If you are currently not logged in to any of Google's services, you can do it here first: https://accounts.google.com/ServiceLogin
Post a Comment
Read more

Create a zip file with subfolders in Rails

- April 26, 2019
Create a zip file with subfolders in RailsUsing system command we can create a zip file from Rails code.Here is the command-system "zip -r zipfile_name . -i /foldername/*"

- April 26, 2019
Screen rotation issue in Ubuntu 18.04 LTS on system restart Whenever I restart my system. My screen rotate automatically. I recently installed Ubuntu 18.04. However I observed for another laptop for which I have installed same Ubuntu version, this is not happening. This issue can be temporary resolved by typing below command.Type below command to switch to normal screen  $ xrandr -o normalTry this command to stop and disable  $ sudo systemctl stop iio-sensor-proxy.service
$ sudo systemctl disable iio-sensor-proxy.serviceTry this command to remove  $ sudo apt-get remove iio-sensor-proxy See also,https://www.programsbuzz.com/article/screen-rotation-issue-ubuntu-1804-lts-system-restart
https://askubuntu.com/questions/1035209/how-to-turn-off-screen-rotation-in-ubuntu-18-04-lts
Post a Comment
Read more

How to install sublime text on Ubuntu

- April 26, 2019
how-to-install-sublime-text-3-on-ubuntu-18-04 To install Sublime Text 3 on your Ubuntu system, follow these steps: 1.  Update the apt package list and install the dependencies necessary to fetch packages from https sources:

3.   Once the repository is enabled, update apt sources and install Sublime Text 3 with the following commands:

Wi-Fi Not Working on Ubuntu? Here's How to Fix it.

- April 26, 2019
Wi-Fi Not Working on Ubuntu? Here's How to Fix it
Temporarily Solution:We need to open file /etc/resolv.conf# add this below line...